This cross is an old hand-hewn stone cross that is found at the site of Church Meadow, in Kilcavan, County Wicklow.  It can be seen laying in the earth into a ditch bordering the old site, where an ancient Church was believed to be.

It is thought to either be from the old Church, or perhaps a marker for a grave.

This privately owned site in Kilcavan, Wicklow is known as ” Church Meadow ” located  just north of the town of Carnew.   It is an open field where it is believed that an ancient church once stood.  On the Ordinance Survey maps of 1838, there is an outline of a domed shape structure that would have been located on the lower left part of this map.
Very little is know regarding the ancient Kilcavan Church but Liam Price, who was an  historian and former president of the Royal Society of Antiquaries of Ireland mentioned in a book that I read, elucidated to a  hand-hewn cross that was embedded in a ditch where the ancient Kilcavan church once was thought to sit.
This put me on  an expedition to go find this cross.  After speaking to the old farmer and owner of Church Meadow, he recalled seeing it when he was a boy.  Together, we dug around in the hedgerow for a few hours in the pouring rain and wearing our “wellies” and  found it.  It sits there still, today. 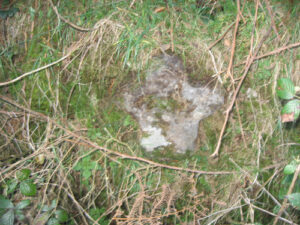